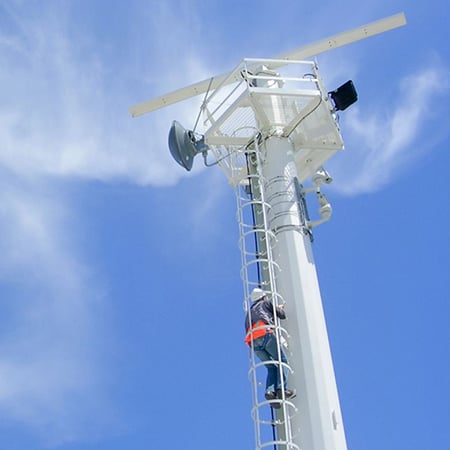 A 25-year-old electronics technician was working alongside one of his supervisors atop an 180-foot high Coast Guard tower installing and replacing radar equipment on November 10, 2000. His body twisted while the workers were lowering a heavy and bulky piece of equipment. The technician felt a sharp pain in his back.

The injury: a herniated disc

Medical examinations found multiple levels of damage to the electronics technician’s spine. He was diagnosed with a herniated disc at the lumbosacral joint (between the fifth lumber vertebra and the first sacral vertebra), and showed signs of a disc bulge between the fourth and fifth lumbar bones. In January 2001, he underwent surgery at the lumbosacral joint. After the surgery, he was unable to work at all for several months; after August 2001, he obtained a sales job.

Despite attempts to accommodate his new limits, the technician’s pain returned by April 2003, and his treating neurosurgeon has recommended additional back surgery.

The technician retained Vuk S. Vujasinovic as his legal counsel and filed a lawsuit in Galveston County District Court against his employer, Advanced Design Systems Inc. of Longwood, Florida, for negligence, claiming the corporation had failed to train him in proper lifting techniques and to provide him with the proper equipment required to do his job safely.

Advanced Design Systems had paid for workers’ compensation insurance at the time of the worker’s injury, but its policy providers denied coverage of this claim. The company is in litigation against the insurance company in the Florida courts.

The defendant denied that the company was negligent in any way. It also contended that the technician was not present on the VTS Coast Guard tower on November 10, 2000, and that he was not injured while acting within the scope of his employment.

The jury determined that Advanced Design Systems was negligent, and awarded compensation to the injured worker.