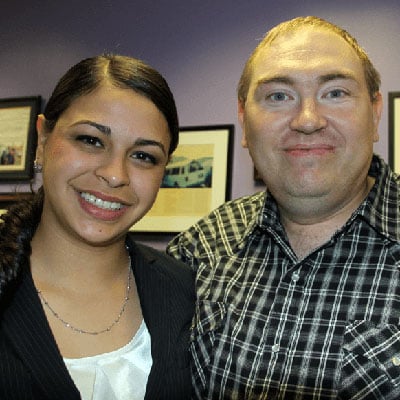 David is a highly experienced truck driver. But there was nothing he could do when the axle on his truck snapped, causing his truck to jackknife and roll over. His company blamed him and fired him immediately. They went so far as to send people to his hospital room the same day as the accident and had him sign a bunch of papers while he was out of it on pain meds. These papers took away many of his legal rights.

David hired us to help him file a truck accident lawsuit since he’d suffered massive injuries – a collapsed lung, broken ribs, a broken collarbone, and multiple spinal fractures. He needed help and he needed it right away. We got to work and were able to prove that the company wasn’t doing right by David. We proved that the wreck wasn’t his fault – the company had insisted on putting profits over safety and had put a truck on the road even though an axle had been broken and welded back together multiple times. The metal was so weak that the mechanics recommended the axle be replaced but the company insisted on a quick fix.

We settled his 18-wheeler case in mediation in August 2016 for a satisfactory amount. Afterward, David sat down and shared his thoughts about his experience, saying:

“Hi, my name’s David. And I was injured in a 18-wheeler accident. When the accident happened, at first I didn’t think I was injured until I got out of the truck and noticed that I was injured and I was trying to get some help.

“And probably about 5 minutes after the accident happened, I noticed a white pickup with the headlights coming down and then I just laid down and pain started hurting. I mean, the pain hit and after that I don’t remember much. I know that the other driver had to call for help.

“Companies, they’re all out just for their bottom line. They don’t care about other drivers or employees. They just care about themselves and about their revenue.

“It was several months after the accident that when I got my memory back and everything from the wreck and talking to my family and everything. And they told me that I needed to get an attorney to help get – you know – my medical and stuff to get going and start trying before I could see doctors and stuff. I was looking through the internet and for some reason, you guys’s name popped up and for some reason I was attracted to this law firm. So – it’s like God was telling me this is the law firm to hire. That’s how I came across this law firm.

“You guys really helped me out with you know finding a doctor and getting answers that I’d been requesting about myself and about the injuries I sustained in the accident.

“And you guys helped me out with this quite a bit. I say thank you very much – you’ve been really good help and you’ve been great through all this process. And I couldn’t ask for a better team than you guys.”