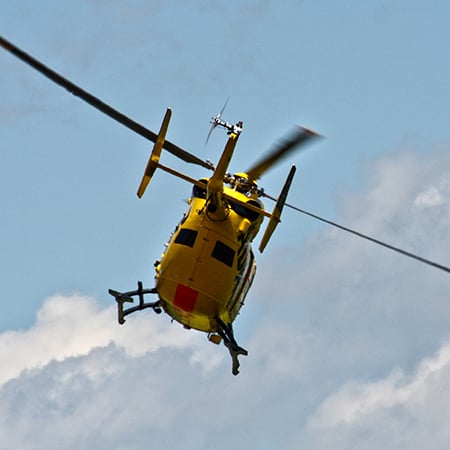 Offshore oil rigs can be dangerous—even deadly—work environments, and even getting to work can create serious risks for the men and women who spend long hours laboring on platforms and rigs around the world. Helicopter accidents at sea injure or kill oil rig contractors and employees during air transportation to or from worksites. A study of offshore injuries and fatalities concluded that getting to work was the most dangerous part of an offshore worker’s job. In fact, multiple accidents have taken place involving helicopters transporting to and from rigs and platforms:

This list represents some of the recent offshore helicopter accidents. It illustrates the need for improved safety at every stage. Companies need to address safety from the point of manufacture to maintenance. Mechanical failure is listed as the culprit for far too many of these tragedies.

Helicopter pilots who transport workers to offshore rigs generally undergo training to help limit the severity of a crash when something goes wrong. However, safety training and emergency planning can’t stop every accident – and that danger is seriously compounded when:

HeliOffshore, the global safety-focused association for the offshore helicopter industry, has partnered with government agencies, oil and gas companies, and other partners to improve safety on personnel transfer flights. Their goal is to reduce the fatality rate to zero. HeliOffshore’s Helicopter Terrain Awareness and Warning System (HTAWS) is set to upgrade. HTAWS gives pilots between 6 and 30 seconds of additional warning of a potential collision.

Helicopters are essential to the offshore industry and the maritime industry. From transporting crews to offshore rigs and providing life-saving emergency rescue services, helicopters do what other aircraft and vessels can’t. This means that governments should examine safety regulations and find ways to improve them. And that companies should prioritize state-of-the-art safety equipment, software, and training.

How the offshore helicopter transport industry can improve safety

“Safety failure” stands for multiple types of failure. It includes a manufacturing defect that slips through testing and quality control checks because the company wanted to maximize profits. The failure of a company to implement safety rules about flying in severe weather is also a safety failure. Another safety failure is the company’s failure to follow industry standards when it comes to maintenance or use. Safety failures include hiring inexperienced pilots or pilots with spotty safety records. The list goes on.

Most safety failures are preventable. But reducing the number of safety failures in the offshore helicopter transport industry requires that the industry and governments prioritize safety over profits.

Dr. Rob Hunter, head of flight safety at the British Airline Pilots’ Association (BALPA), told the Telegraph, “In offshore helicopter operations in support of the oil and gas industry, the fatal accident rate is around one per 250,000 hours.” This is much higher compared to the commercial airline industry. Commercial airlines experience one fatal accident per 10,000,000 hours. However, planes cannot fly in many of the situations for which helicopters are used. These statistics are unable to account for that difference.

One solution would be for governments to increase safety standards while providing incentives to upgrade or buy new helicopters. We know that safety regulations are effective in reducing the number of crashes and fatalities. The British Civil Aviation Authority, their FAA, is implementing new safety regulations after the 2016 crash that killed 13 people off the coast of Norway. These new safety rules include increasing safety measures on board helicopters as well as prohibiting helicopters from flying in dangerous weather.

Cut through the confusion after an offshore helicopter transport accident

Often, you will face a confusing maze of companies, owners, contractors, adjusters, and mysterious paperwork after a crash. Companies try to avoid being held responsible for a crash. They purposefully make things confusing for you. In addition, you may have a Jones Act claim, depending on your job. These claims require specialized expertise in maritime law.

Also, companies, especially in the United States, take action only when their bottom line is threatened. An injury or wrongful death lawsuit is not only your constitutional right, it is often the only way to hold the company accountable for their safety failures and to prevent future incidents. That’s where our team of offshore helicopter accident attorneys can help you.