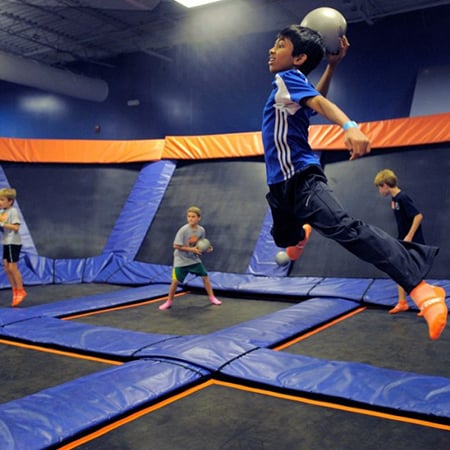 His parents have hired us to help them hold the indoor trampoline park accountable for the safety failures that caused their son’s injury.

Indoor trampoline parks are becoming more and more popular across the United States. These parks market themselves as great for kids, but the injuries occurring across the country tell a different story.

What they don’t tell you is that there really aren’t industry rules or guidelines. The only people making the rules are the trampoline parks themselves. There are no third-party independent safety groups making evidence-based safety rules that include regular inspections, maintenance, and safety training.

An expert witness in more than 200 plaintiff cases against trampoline parks told CBS that the injuries these parks cause are “life-altering.” He continued, saying, “the danger lies in the design.”

Indoor trampoline parks usually feature wall-to-wall trampolines with padded walls or angled trampoline walls. Because the trampolines are connected with steel cables or chain links under thin padding, jumping on one can cause a chain reaction on surrounding trampolines. As people jump, waves of energy radiate out in all directions, which can cause dangerous situations that end in high-impact collisions.

Common causes of injuries at trampoline parks include falls, contact with other jumpers, and flips. The study concluded that trampoline parks pose a high risk for leg injuries because of how high people are jumping and for the speeds they attain while jumping. These factors cause more stress on the lower extremities. Another factor that contributes to leg injuries is landing on the trampoline frames, springs, surrounding poles, and other structures.

Trampoline parks usually make parents and guardians sign releases before anyone can use the facility. They require these releases because they know the dangers. These releases openly warn you about the possibility of broken bones and paralysis.

At our firm, we hold unsafe, negligent, and irresponsible corporations accountable every day. To find out how we can help you get justice and fair compensation for your trampoline park injury, call us now at 877-724-7800 or fill out a contact form. Our experienced, Board Certified personal injury attorneys will answer your questions, help you determine if you have a case, and help you make an informed decision about how to proceed.