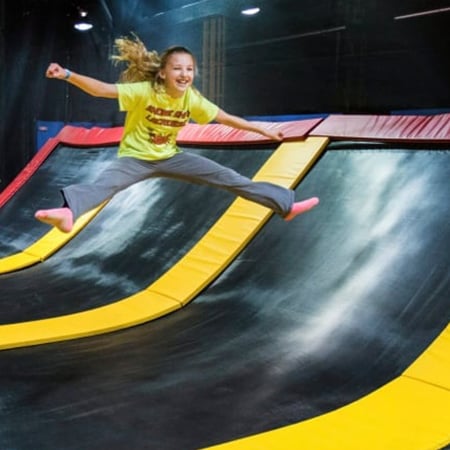 While the popularity of trampoline parks soars, so does the number of catastrophic injuries and deaths

Most parents see trampoline parks as a place to take their children to burn off extra energy. In fact, on weekends you can find them packed with jumping, running, and playing children and adults. Unbeknownst to them, trampoline parks have also developed a history of injuries and even death.

In the last few years, trampoline parks have exploded into a billion-dollar industry. According to The Journal Pediatrics the number of trampoline parks surged from about 40 in 2011 to 280 in 2014. An estimated five to six new parks open each month, and there were probably about 450 nationwide by the end of 2018.

Trampoline parks have caused six deaths in the past seven years

According to an article published by CBS News in the past seven years, six people have died from injuries sustained at trampoline parks. Many believe that number could be higher since most companies try to push injured parties into arbitration and signing confidentiality agreements.

CBS interviewed Don McPherson who has been a gymnastics coach for over 40 years. McPherson said since 2011 he has been an expert witness in more than 200 injury cases against trampoline parks. “Broken necks, broken backs, dislocated and open-fractured elbows, shoulder,” McPherson said. “They’re all catastrophic injuries.”

The speed and energy at which bodies are jumping and moving on trampoline park equipment sometimes causes an impact that is twice the weight of the person. When you add in multiple users on the same piece of equipment, the risk for these injuries increases. Most parks allow users to jump from trampoline to trampoline which often causes them to crash into one another.

Former world-class gymnast Ric Swezey is proof of that. In 2017, he visited a trampoline park in Virginia with his children and husband when his husband he came down wrong on his foot, stumbled and hit his head against a padded wall. His C2 verterba cracked, which constricted his airway and blood flow, paralyzing him. Within three minutes he became 90 percent brain dead.

Experts in gymnastics say these communities are “death parks.” Lack of supervision and misplacement of trampolines against thinly padded walls cause more and more injuries each year. The foam pits also cause accidents due to being too shallow for users to safely jump into without injury.

Additionally, jump parks usually have trampolines with a stronger “bounce” than regular, at-home trampolines. Most parks place obstacles around the park to make it more exciting for participants. Varying slopes and increased obstacles makes collisions even more likely.

The American Academy of Pediatrics discourages recreational trampoline use because of the large risk of injury. However, they say if you still allow your children to use trampolines, constant adult supervision and adequate protective padding is important. As is only allowing one jumper at a time and avoiding flips and somersaults.

According to the Consumer Product Safety Commission,  trampoline injuries have skyrocketed. The number of injuries due to trampoline parks has gone up from 2,500 injuries in 2013 to almost 18,000 in 2017.
Recently lawmakers in Utah attempted to pass a law to add another level of safety to these types of establishments. They join at least seven other states in requiring more oversight from insurance companies and annual inspections. In the U.S., all of them operate without any federal oversight.

Trampoline parks have a duty to protect users from harm

When you take your children to an amusement park or jump facility, you should feel safe expecting that the facility has your child’s safety in mind. Injuries due to unsafe design and ineffective safety measures occur often at these fun parks and have led to lifelong disabilities and deaths.

If you or a loved one has been injured or killed at a trampoline park you need an experienced personal injury attorney on your side. You deserve to be able to enjoy fun parks safely. Give us a call at (877) 724-7800 or fill out a free, confidential case evaluation form.