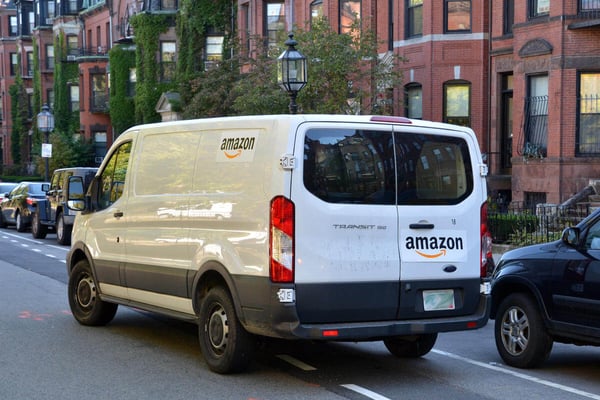 My family loves the convenience of Amazon’s fast and free shipping. Heck, I’ll bet some sort of delivery box shows up on our door almost every day of the week, sometimes multiple times a day.

Have you noticed that over the past few years the delivery trucks aren’t always brown UPS vans or FedEx trucks or US post office mail trucks?

Instead, over the past few years, I’ve seen the UPS and US Post Office trucks replaced by fleets of white delivery trucks, mainly Dodge Ram delivery trucks all over the place, all over my neighborhood, delivering packages at all times of the day and night.

I’ve always assumed that those were Amazon vans, and if one of those vans were to cause someone to be injured or killed, Amazon, with its billions of dollars of revenue, would fairly compensate anyone who was injured or killed by one of their drivers.

I was wrong. Turns out that even though I am a lawyer who works on these kinds of cases every day, I did not know that Amazon has set up an elaborate scheme to avoid any accountability for its contracted delivery drivers, using outdated laws that simply don’t work in the age of technology and of fast and free shipping in order to insulate itself from accountability for its drivers’ recklessness.

So bottom line: Amazon reaps all the profits and pays none of the costs at all.

Here’s how the scheme works:

Amazon has built a huge logistics operation in its push to dominate e-commerce. It has created a network of delivery drivers whose primary job is to get goods to customers as quickly as possible.

Amazon tightly controls the order and route of deliveries through a dispatching app. Amazon requires that 999 of 1,000 deliveries arrive on time. It uses software to track its drivers and punishes those who don’t meet its strict requirements.

Then, when one of the drivers hurts or kills someone, Amazon claims in court that it has no responsibility at all for the negligence of its drivers. Amazon tries to push all the legal responsibilities off on other companies, claiming that its drivers should pay all costs, even though Amazon gets all the gain.

It’s completely un-American to take all the profits but then claim no responsibility at all for the human costs. Especially when you are a corporation worth hundreds of billions of dollars, owned by the richest man in the world, and don’t pay a dime in federal income tax.

Amazon should be ashamed for manipulating the legal system like this. Its lawyers should be ashamed for trying to help Amazon avoid any accountability at all. Judges who rule in Amazon’s favor on these issues are ruling against the rights of your family and mine to hold wrongdoers accountable for their negligence. And the politicians who turn a blind eye aren’t doing their jobs, either.

Second, vote. Pay attention to which politicians and which judges rule in favor of Big Corporations and Big Insurance, and vote them out of office.

Third, be prepared for a hard battle. Amazon didn’t become one of the largest companies in the history of the world by playing fair. The only way to hold them accountable is to fight back just as hard as Amazon fights you.

Bottom line: Fast and free shipping is awesome. It’s especially helpful for people who aren’t able to get the items they need, when they need them, because they have kids, jobs, or are not mobile.

Amazon makes billions of dollars every quarter. But there’s a cost to all of us, and part of the cost is the costs associated with dangerous delivery drivers.

Who should pay those costs? The company making billions of dollars using this scheme, or the innocent people  who fall victim to the scheme?

The answer seems pretty clear to me.