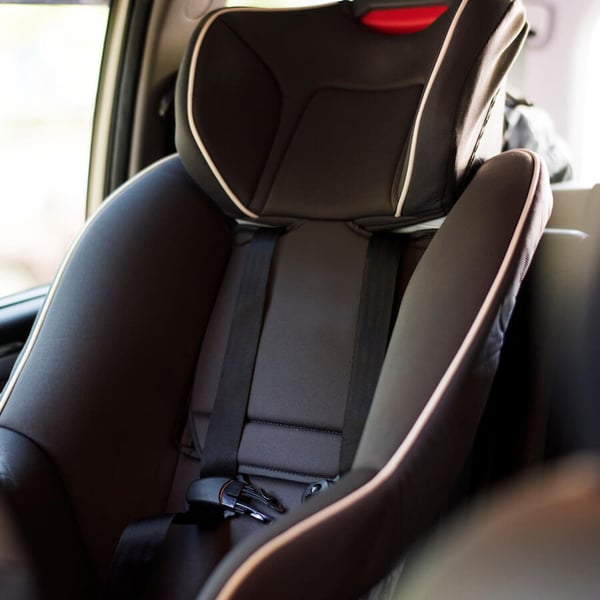 Children who are too big for safety seats and too small for adult-size seat belts face a high risk of injury in crashes. Youngsters who fall into this safety gap need artful advocacy.

By VUK VUJASINOVIC, Board Certified Personal Injury Law, Texas Board of Legal Specialization

Safety experts and auto manufacturers have long known that a lack of crash protection exists for children between the ages of four and eight. Most children in this age group have outgrown their child safety seats. Yet they are too small to be adequately protected by seat belt restraints that have been designed for adults and fit poorly on a child’s small frame.1

Automakers say that children who are 12 and under should ride in a vehicle’s rear seats.2 The outside rear seats of domestic vehicles made in the last decade are equipped with combination lap/shoulder belts. Passengers seated in the middle of a rear bench seat are usually secured by a two-point lap belt. Unfortunately, few of these restraints are designed to accommodate an occupant shorter than 57 inches and weighing less than 80 pounds.3 The average six-year-old child—who is right in the middle of the “forgotten child” age range—stands only 47 inches high and weighs merely 52 pounds.

Manufacturers concede that injuries and deaths attributable to the safety gap have reached unacceptable proportions. According to industry estimates, 500 children are killed every year, and thousands more are seriously injured, due to a lack of proper belt usage.4 Many of these children were killed while wearing safety belts.5 At a recent trade show, a former chief executive officer of Ford Motor Co. told colleagues that “these are preventable tragedies and urgent action is needed” to close the safety gap.6

Studies demonstrate that every 90 seconds a child is killed or injured in a motor vehicle crash.7 During the 1990s, children between the ages of four and eight were dying in crashes at a rate of about 16 per week.8

Manufacturers would have the public believe that the best way to prevent these tragedies is through the use of aftermarket child safety seats. According to the National Highway Traffic Safety Administration (NHTSA), placing a child in an age-appropriate safety seat will reduce a child’s risk of dying in a crash by as much as two-thirds.11

The National Transportation Safety Board and NHTSA recommend that children who outgrow child safety seats be placed in “booster seats” until they are large enough for adult-size lap and shoulder belts.14 A well-designed booster seat positions a child so that the three-point shoulder and lap belts fit better.

However, less than 10 percent of children between the ages of four and eight use booster seats.15 This is probably due, in part, to the lack of consensus among experts concerning which types of seats are appropriate for children of different ages and sizes.

This confusion is exacerbated by manufacturers’ failure to develop their own booster seats. Not every seat works well in every vehicle. Obviously, auto manufacturers are in the best position to determine which types of booster seats are best suited for the wide range of vehicles they build. But they neither build booster seats nor adequately test aftermarket seats to determine which ones can be used safely with their vehicles’ rear seat-belt restraint systems. As a result, parents are denied important information regarding the proper fit of booster seat, child, and vehicle.

In a collision, the seat belt is supposed to slow down the occupant with the vehicle and spread the forces of the collision to the strong bones of the body.18 Proper belt fit and good belt geometry are important in maximizing protection.19

Submarining injuries. The lap portion of a properly fitting seat belt should fit snugly below the hips.20 In a crash, the lap belt should couple the occupant to the vehicle and provide restraint by transferring force to the pelvic bones.21 Submarining occurs when a passenger’s pelvis and buttocks slide down and forward during a collision, allowing the lap belt to slip up to the abdomen.22 Submarining can cause severe intra-abdominal injuries and spinal cord trauma.23

Children between four and eight are particularly vulnerable to this type of injury. The lap and shoulder belt geometry is not well suited to their stature. They tend to slouch down in their seats because their legs do not hang comfortably over the edge of the seat cushion.24 Consequently, the lap belt lies above the child’s pelvis and can easily slide up to the abdomen during a crash.25

Fulcrum injuries. The shoulder harness of a rear seat lap/shoulder belt typically passes diagonally across an adult’s outside shoulder, over the sternum, and down to the inside hip where it connects with the lap belt and fastens into the seat belt buckle.26 In the case of a child, the typical shoulder harness crosses in front of the child’s face or throat.27

A belt in this position creates an artificial fulcrum that, during an accident, can stretch the upper spine past the breaking point, resulting in paralysis or death.28 If the torso belt is not used (either because the vehicle is not equipped with it or because it is placed behind the child’s back for a more comfortable fit), the fulcrum point is at the waist. This can cause severe head injuries when the force of an impact throws the child’s head forward onto his or her knees or the back of the front seat.29

Full or partial ejection injuries. Some seat belts are so poorly designed that even belted children can be thrown completely out of a vehicle. Such was the case in Johnston v. Ford Motor Co.30 In that case, five-year-old Cody Johnston was riding as a front-seat passenger while his mother was driving the family’s Ford Ranger on an interstate. Both Cody and his mother were wearing three-point lap/shoulder belts.31

Another vehicle collided with the Ranger, causing it to roll over. Cody was thrown from the car and killed. The investigating officer noted in the police report that Cody was not big enough for the seat belt and that the belt was still buckled after the car came to rest.

Poor seat-belt design can also cause partial ejection.32 Torso rollout—when the torso of a child completely escapes or rolls out of the shoulder harness—is a type of partial ejection that can occur in oblique crashes and rollovers.33 Children who roll out of a shoulder belt often sustain severe intra-abdominal injuries and lumbar or cervical spinal cord injuries, often resulting in paralysis.34

As with any crashworthiness case, one brought on behalf of a child injured by improperly fitting, or absent, safety belts is based on the claim that the vehicle was defectively designed because it failed to provide adequate occupant protection during a crash.

In addition to proving that a product is unreasonably dangerous as designed, plaintiffs in many jurisdictions are required to assert a design defect claim to prove the existence of a safer alternative design. A safer alternative design in safety gap cases is the integrated child seat. These are seats with harnesses built into the cushion of a vehicle’s rear seats. They have been available in some European vehicles since the late1980s. Child safety advocates, manufacturers, and safety experts agree that an integrated child seat with a five-point harness is the safest form of child restraint available.35

Most jurisdictions also require plaintiffs to prove that a proposed safer alternative design is economically and technologically feasible. In the United States, Chrysler first introduced five-point integrated child seats in the U.S. market by placing them in its minivans in the 1992 model year. Other manufacturers have also offered the seats, as optional equipment on select model vehicles.

Accordingly, the auto manufacturers’ own conduct proves the technological and economic feasibility of this safer alternative design. Moreover, there is no real functional or cosmetic problem associated with integrated child seats; the seat is virtually indistinguishable from a normal bench seat when the safety seat is not in use.

Plaintiff attorneys also should consider advancing a marketing-defect claim. This concerns the seller’s failure to adequately warn or instruct consumers on the safe use of the product. Manufacturers recognize that nearly 80 percent of parents do not use the proper safety device for their four- to eight-year-old children; automakers clearly have knowledge of the danger. Yet manuals and notices that accompany many vehicles do not warn parents of the danger associated with having children wear seat belts designed for adults.

Many owner’s manuals may suggest that booster seats be used for children who weigh 40 to 80 pounds, but they are unlikely to contain any meaningful instruction on which ones work best with the vehicle’s seat belts. These vehicles therefore lack adequate instructions for safe use by children in the safety gap.

As soon as a potential client contacts you, take immediate steps to preserve the evidence. The vehicle should be secured in its postcrash condition. Nothing should be disassembled or removed from it without notice to the defendants.

You should inspect the seat belt, review the child’s medical records, and interview witnesses to determine if and how the child was wearing the belt. A qualified accident-reconstruction expert should inspect, measure, and photograph the crash scene and any other vehicles involved.

Retain a biomechanical engineer or qualified medical expert to review the medical records, X-rays, and other imaging studies to determine whether the child’s injuries were caused by a belt’s poor fit and geometry. After an initial review, consult an expert with knowledge of automobile design to analyze the design defect claims.

Obtain documentation from the manufacturer relating to the design and marketing issues raised in the case. Many of these materials have been disseminated publicly or uncovered in earlier litigation, so you may already have many of the relevant documents even before filing the case.

First, the automaker may deny that a safety gap exists. This defense is easily refuted by statistical information compiled by independent third parties like the consumer advocacy group Public Citizen and by the auto industry’s own statements acknowledging the safety gap.

Second, the manufacturer may blame the child’s parents for not using a booster seat. To counter this, produce evidence showing there is no consensus on the appropriate use of booster seats. Properly qualified design and biomechanical experts can explain why the use of a booster seat may not have prevented the injuries sustained in a particular crash.

Finally, the manufacturer almost certainly will argue that because its rear-seat restraint system meets Federal Motor Vehicle Safety Standards, it is not defective. However, compliance with government standards does not establish as a matter of law that the design is not defective. Explain to the jury that these are minimum standards and that nothing prevents manufacturers from exceeding these minimum standards in the interests of children.

Auto manufacturers have a duty to design and market cars that provide consumers of all ages with a reasonable level of protection in the event of a crash. While seat belts may provide protection for many adults, a gap in crash protection exists for children between four and eight years old. Successfully pursuing cases for the forgotten children in this age group should allow the injured to obtain justice and cause auto manufacturers to improve the safety of their cars.