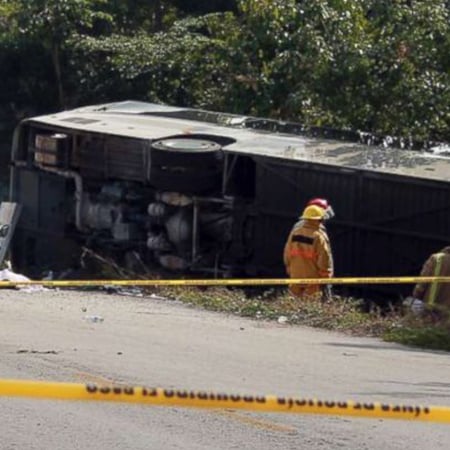 On a narrow road in the Quintana Roo region of Mexico, a Costa Maya Mahahual tour bus flipped and hit a tree on December 19, 2017. Eight people were killed and over a dozen people were injured in this wreck. The public prosecutor’s office has opened an investigation into this Mexico tour bus crash. The prosecutor has opened an investigation for crimes of homicide, injury, and damage. The bus driver has been taken into custody.

The passengers on the bus were on a Royal Caribbean cruise and were taking a day trip to see Mayan ruins. Another Costa Maya Mahahual bus was traveling in front of the one that crashed. Passengers reported the weather was clear, the road was dry, and they didn’t see any hazards that would have contributed to the crash. Mexican authorities believe the driver’s negligence and potential speeding led him to lose control and leave the road. They believe when he tried to get back on the road, the bus flipped and hit a tree, which indicates the bus itself may have suffered from a stability product liability defect.

Victims and their families need to know they have rights. Cruise ship tickets come with boilerplate language that every passenger is bound by an arbitration agreement in the event a passenger is injured or killed on the cruise. Arbitration is designed to favor the cruise ship company, no matter the circumstances of your injury. However, when incidents occur off the cruise ship, victims may not be bound by the arbitration agreement may not apply. In situations where passengers are on an excursion and take a tour bus, they may have a valuable third party negligence claim against the bus company or a products liability claim against the bus designer and manufacturer.

In this case, victims and their families may be able to bring a third party lawsuit against Costa Maya Mahahual and its owners. Tour bus companies are required to carry insurance policies in the event of a crash or other incident. In our experience, the help Royal Caribbean is giving victims now won’t cover all the expenses victims will incur. In filing a third party lawsuit, victims of this tour bus crash may be able to be compensated for all their losses.

In a products liability lawsuit, a product designer and manufacturer are liable for the damages they cause because of a defective product. Here, the bus may have had a design and manufacturing defect, which allowed the bus to roll over.

For families of victims who lost their lives in this crash, the third party lawsuit would also allow them to bring a wrongful death claim against the bus company. A wrongful death claim benefits the parents, children, and spouses of the deceased – the people who will be financially affected by this loss. Families would be able to seek compensation for funeral expenses, any future financial losses caused by this crash, and more.

The tragedy presents a unique set of legal facts because it occurred in the Country of Mexico, which will present jurisdictional issues no matter where the victims litigate their lawsuit. Traditionally, Mexican law subscribes to a legal concept called “territorial competence,” which provides that the only court that can hear a product liability dispute is the court where the company that made the product is domiciled even if outside of the Country. If the company that manufactured the bus is a US domiciled company and the victims file suit in there, US courts subscribe to a legal concept called “forum non convenies,” which allows a court to dismiss a lawsuit because the court is not near where the product manifested its defect. In other words, there could be no court that could adjudicate this case.

Even though Mexican authorities have stated the bus driver’s negligence caused the wreck and have opened a criminal investigation into the crash, victims and families are still able to pursue an independent investigation and seek justice in civil court. We have many questions in the aftermath of this crash, including:

By launching an independent investigation and pursuing justice in the civil courts, victims and families will be able to get answers to these questions as well as answers to questions of their own. We are uniquely qualified to litigate international tort and are pioneers in this special area of the law. Our experience successfully representing victims of bus crashes and representing victim of product defects that manifested themselves in Mexico means we are uniquely positioned to help crash victims and their families get answers and get justice. No matter where the crash occurs, victims should make sure their legal rights are protected and they are pursuing every avenue to get justice for their injuries. To find out more about how we can help victims of tour bus crashes, contact us at 877-724-7800 now.