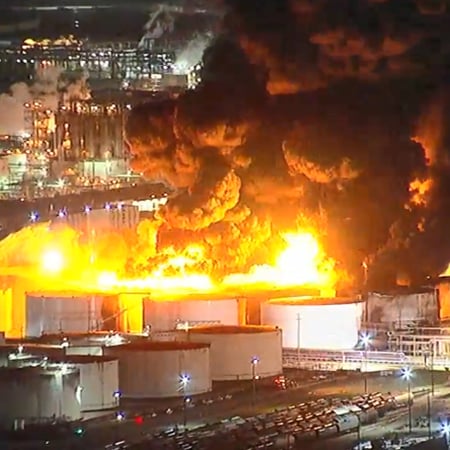 On Sunday, March 17th  a fire broke out at a petrochemical storage facility in Deer Park, on the outskirts of Houston, Texas. At the time around 30 employees were working at the plant. According to reports, all employees are accounted for and no injuries are reported.

The fire began in a single tank just before 11 a.m. on Sunday morning and quickly spread. By Monday morning, seven of the Deer Park facility’s 242 tanks were involved in the fire. Three of the eight tanks that have caught fire have now burned out, almost two days after the massive blaze began.

Some of the tanks contain Naphtha and Xylene, both gasoline components. A number also contain Toluene, a chemical used in nail polish remover, glue and paint thinner. All of the chemicals are highly flammable and dangerous if ingested or breathed in and hold around 80,000 barrels each.

The facility is owned by Intercontinental Terminals Company and stores gas, oil and chemicals. The City of Deer Park, ITC, and Harris County Judge Lina Hidalgo said tests indicate the air was not dangerous as of Monday afternoon. Deer Park and La Porte schools were shut down as a precaution but resumed today. On Sunday, a mandatory shelter-in-place for the entire city of Deer Park was issued but has since been lifted.

Firefighters say the blaze could take days to burn completely out. The cause of the fire remains under investigation.

Plant fires and explosions are a common occurrence

Last year, an explosion occurred at the Valero refinery in Texas City, Texas. On April 19, 2018 firefighters were called to the refinery after a fire broke out around 5 pm. Valero reported that all personnel was accounted for and no one was injured.

Merely a month later, on May 19, 2018, over-pressurization of piping in the Kuraray America Eval building in Pasadena, Texas caused a valve to blow. This explosion caused a fire that left twenty-two maintenance workers with serious burns or injuries caused in the evacuation.

According to recent fire statistics from the National Fire Protection Association (NFPA)  an average of 37,000 fires occur at industrial and manufacturing properties every year. These incidents have resulted in 18 civilian deaths, 270 injuries, and $1 billion in direct property damage. Failure to follow property safety procedures and regulations often is found to be the cause of these incidents and employees are the ones who suffer.

As an employee, you are automatically at a disadvantage when an explosion or fire happens. Often your employer will begin investigating immediately and leave you out of the process. Luckily, there are things you can do to make sure you and/or your injured family member is fairly compensated after a life-changing accident.

Without an experienced workplace explosion attorney on your side, its possible that you may not have access to evidence, accident scene, or other necessary information. Our law firm can get to work immediately to ensure no evidence is destroyed. Give us a call today at (877) 724-7800 or fill out our free, confidential case evaluation.