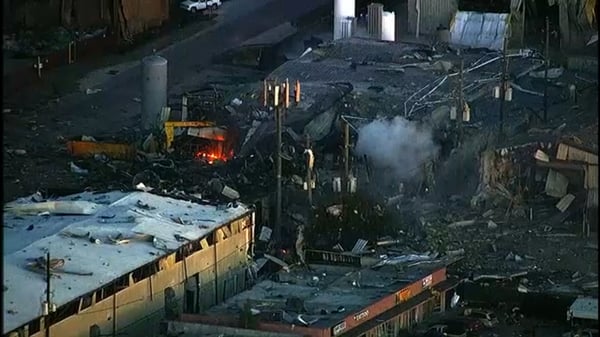 A massive explosion at a manufacturing business in northwest Houston has rocked the entire city. At least 2 people have been confirmed dead and another is currently unaccounted for. The explosion took place at Watson Grinding at 4500 Gessner.

The explosion has damaged nearby homes and businesses. According to HPD Chief Art Acevdeo, the debris from the explosion extend for about a half-mile. A nearby homeowner was rushed to the hospital by first responders with the Houston Fire Department after being injured by glass that was shattered as a result of the massive explosion.

Houston’s ATF and bomb squad are working in accordance with the Houston Fire Department in determining the cause of the explosion.

Officials are reporting that ingredients used to make polypropylene were released into the air after the explosion. Firefighters are going door-to-door in the area asking people in the area to consider getting out because they are not completely sure what’s in the air.

The City of Houston has indicated that there is nothing dangerous in the air. There is currently no evacuation at this time but officials are asking folks nearby to avoid the area.

What To Do If You’ve Been Impacted By The Explosion

If you or someone you know has been injured or if your home or property has been damaged as a result of this explosion it is important you seek legal counsel as soon as possible. It is important you take any and all necessary steps to protect your person as well as your property. Call 877-724-7800 or click here to complete our contact form.