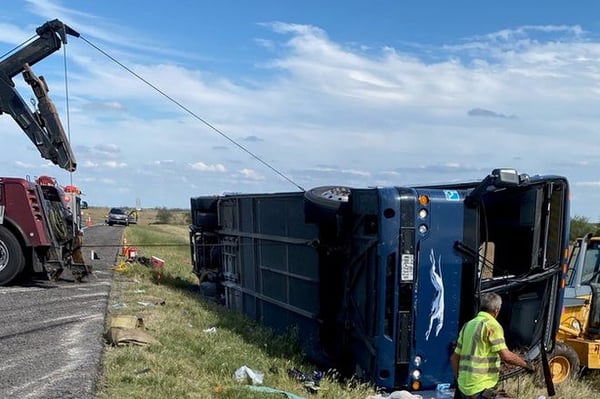 A passenger who was catastrophically injured when he was ejected from a Greyhound bus during a rollover accident is being represented by a founding partner of VB Attorneys, Vuk Vujasinovic. VB Attorneys has filed a lawsuit against Greyhound in Dallas county, Texas, where Greyhound maintains its headquarters and corporate offices.

A Greyhound passenger bus underwent a fatal rollover accident after a pick-up truck collided with the bus between US 277 and US 183 in Baylor Country, Texas. Officials familiar with the crash reported that the Greyhound bus flipped over twice with twenty-nine passengers on board.

An official with the Texas Department of Public Safety confirmed that one passenger died at the scene, and multiple passengers were severely injured. Several ambulances responded to the accident, and three passengers were airlifted by Aerocare helicopters to nearby hospitals with critical injuries. The pick-up truck driver suffered from non-life-threatening injuries.

VB Attorneys has filed a lawsuit against Greyhound based on this crash.  Allegations include the bus driver’s failure to properly control the bus following the initial contact.  In addition, the lawsuit alleges Greyhound failed to properly protect its passengers via seat belts and window glass that would prevent passengers from being ejected.

Under Texas law, bus companies like Greyhound are “common carriers,” meaning they owe the highest duty of care to passengers.

Greyhound is notorious for its corporate negligence, and VB Attorneys has held Greyhound accountable for its failure to keep passengers safe on countless occasions. Board Certified trial attorney Vuk Vujasinovic has successfully represented many clients in their claims against Greyhound. If you or someone you know was injured as a passenger on a Greyhound bus, it's important to contact us as soon as possible. Call today at 713-224-7800 for a free and confidential case evaluation.