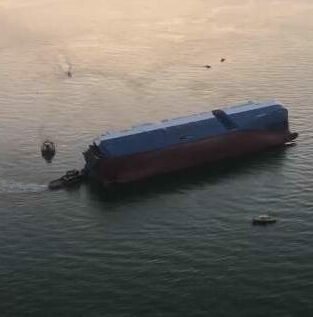 Twenty crew members have been rescued by the U.S. Coast Guard.

The Golden Ray was departing the Port of Brunswick, Georgia, on its way to Baltimore, Maryland, with about 4,200 cars on board when it lost control, listed to one side, and capsized in St. Simons Sound. The ship notified the Coast Guard it was listing around 2:00 a.m. on Sunday morning.

A fire also broke out on board the vessel. Rescue efforts were suspended on Sunday afternoon until the vessel could be stabilized. Coast Guard Captain John Reed told reporters, “Once salvage professionals have determined the vessel to be stable, we will identify the best option to continue our rescue efforts for the four crew remembers who remain on board.”

The Golden Ray is a roll on, roll off ship (Ro-Ro) built in 1973. This type of ship is notoriously prone to capsizing, catching fire, and/or sinking. The El Faro tragedy a few years ago wasn’t an aberration. It is the norm for these types of ships.

At least nine Ro-Ro ships have caught fire or capsized in 2019 alone:

Roll on, roll off (Ro-Ro) ships such as the Golden Ray are highly dangerous by design

The Golden Ray is the 10th reported Ro-Ro incident in nine months. These ships have long been considered dangerous. One factor is their age – many Ro-Ro ships are over 30 years old. The other factor is their design.

These ships are very shallow, with a low center of gravity. That causes the ships to roll dramatically and the cargo lashings to be highly stressed. This combination leads to cargo breaking loose when the ship rolls, causing the ship to list and even capsize.

Ro-Ro ships also have completely open interior decks without bulkheads. This means when the ship takes on water, there is no way to stop it. This results in the ship losing stability faster than ships with bulkheads and capsizing. Open decks carrying cargo make fires more dangerous as well.

Another factor that can lead to the vessel capsizing is the placement of stern and bow doors very close to the waterline. When the doors aren’t locked properly, or if the door is defective, the ship can take on water, creating a very dangerous situation.

Those are just some of the design risks of Ro-Ro ships. When it comes to fires on Ro-Ro ships, the International Union of Maritime Insurance voiced its concerns over an increase in Ro-Ro fires.  Ro-Ro ships were catching fire twice as often as other types of ships, the group reported in 2017.

The single most frequent sources of fires are reefer units, powered by electrical cable or diesel units. Another cause has been electrical equipment on board, including equipment in vehicle cabs and vehicle engines. Undeclared or mis-declared cargo is another fire hazard.

The bottom line is that these ships should not be sailing. Their design is convenient for companies, but deadly for crews and passengers. No matter what safety regulations are put in place by the International Maritime Organization, these ships won’t become safer.

We have Ro-Ro ships all over the United States – from car carriers like the Golden Ray to passenger car ferries. Many of these ships are over thirty years old, many of them can’t be retro-fitted or re-hauled to be safer in any way. Crews are already highly trained to fight fires. But as we see in the case of the Golden Ray, if the fire starts after the ship lists and begins to capsize, the biggest threat is the rapidly sinking ship.

As search and rescue operations for the four remaining Golden Ray crew members continue, we pray they are safe and rescued quickly. The best way to prevent another disaster is to remove all Ro-Ros from service.

Our job is to protect mariners. And hold unsafe companies accountable for endangering their safety. These ships endanger thousands of people’s lives every single day around the world. Their only purpose is to save companies money. It is past time to design a new type of car carrier vessel. A safer ship.

From historic lawsuits such as the Maersk Alabama pirate attack to record-breaking verdicts and settlements, we don’t rest until we get our clients the results they deserve. We specialize in helping Jones Act seamen, mariners, and people working on the water. Protect your rights and get the compensation you’re owed after getting hurt working on the water.  Get help now. Call us at 877-724-7800 or fill out a contact form on our website.