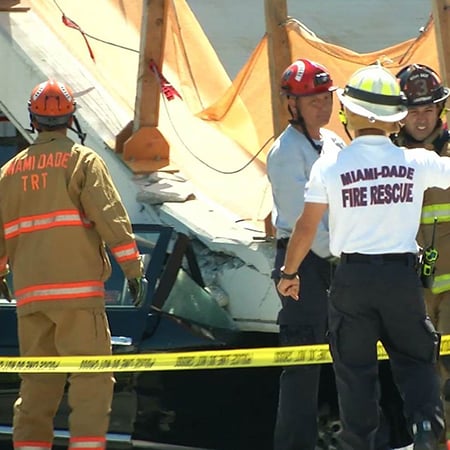 On Thursday, March 15, 2018, a pedestrian bridge under construction collapsed on a busy highway in Miami, Florida. The bridge crushed multiple vehicles that were stopped at a red light, killing at least four people and sending ten more people the Kendall Regional Medical Center. Two people are in critical condition and eight people suffered non-critical injuries.

As of Thursday evening, rescue workers continued search and rescue operations. Miami-Dade Fire Rescue Division Chief Paul Estopinan told reporters they didn’t know how many total cars might be affected, saying, “We could only see eight [vehicles] from the exterior of the bridge.” The Miami-Dade police department’s homicide bureau will take the lead in investigating the collapse, according to the Chief of Police. In addition to local law enforcement investigations, the National Transportation Safety Board is sending a 15-person team to investigate the collapse.

Companies behind construction of pedestrian bridge have history of safety complaints

Two firms, according to CBS News, have been accused of unsafe practices in the past. These firms both have federal contracts.

Ten days ago, MCM was sued in South Florida by a TSA employee injured when a makeshift bridge collapsed at the Fort Lauderdale airport. The makeshift bridge was constructed by MCM for airport workers to use while the company does construction at the airport. Meanwhile, in 2012 four workers were hurt in Virginia in June 2012 when a 90-ton portion of a bridge fell apart during construction. State regulators fined FIGG $28,000 for safety violations, saying it was “pure luck no one was killed.”

Both MCM and FIGG said they will cooperate with investigators on the scene. Their employees at the scene report that the the bridge was undergoing a stress test on Thursday before the collapse occurred. A company named BDI deleted a tweet from Saturday that congratulated the crane company, Barnhart Crane and Rigging, for “a job well done” moving the main span of the bridge and stated they were “thrilled to have performed structural monitoring during a spectacular bridge move.”

Florida International University’s statement about the collapse said that ABC technology was used in the construction of this bridge. This technology streamlines the building process so bridges can be completed in a timely and cost-efficient manner. ABC technology is used by states across the country to refurbish or construct bridges within 48 to 72 hours, according to the Federal Highway Administration.

By speeding up construction, ABC prevents prolonged traffic delays and road closures. ABC is also credited with making work zones safer. Bridges built using ABC are more durable than those constructed using traditional methods, according to the Federal Highway Administration.This pedestrian bridge was supposed to last 100 years and be able to withstand a Category 5 hurricane.

Victims of bridge collapse and their families deserve answers

This bridge was designed to make students and motorists safer and connect FIU’s campus with the nearby community of Sweetwater. Victims and their loved ones deserve to know why this bridge collapse happened. They also deserve to be certain that these companies will prevent anyone else from being injured or killed in the future.

As the companies and the government launch investigations into this tragedy,victims and families need to do the same. In our experience, companies take advantage of the hours and days after an incident to “clean up the scene.” Crucial evidence disappears or gets taken for “testing,” never to be seen again. The results of the government’s investigations may not be reported in time for victims and families to take legal action to hold the responsible parties accountable.

To find out more about this tragedy, VB Attorneys’ $17,720,000 verdict against a national bridge construction company, or how to launch an independent investigation, contact us now. Call us at 877-724-7800 or fill out a contact form.