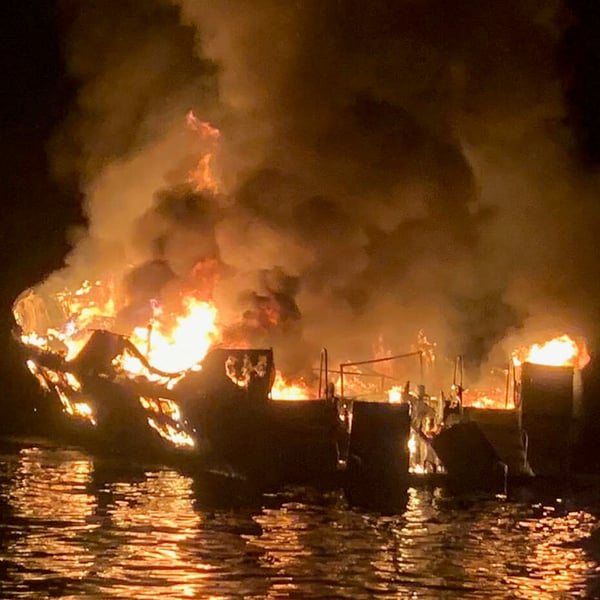 Shortly after 3 a.m. on Monday, September 2, 2019, a fishing boat was woken up by five crew members from the Conception. The Conception, , a 75-foot long scuba diving boat, was on fire. The five crew members were the only people above the deck at the time of the fire. They were awake and on the bridge at the time of the fire. The U.S. Coast Guard received their mayday call at about 3:15 a.m. and immediately dispatched a response team.

The five crew members couldn’t get to the sixth crew member or the 33 passengers who were sleeping below deck. Flames blocked the escape routes for the 34 people below deck.

On the ship’s dinghy – injured, but alive – the five crew members made their way to the only other vessel in Platt’s Harbor, the Hansens’ fishing boat. The Hansens helped three of the crew members who had suffered injuries escaping the fast-moving fire while two crew members took the dinghy back to the Conception to search for survivors.

The ship was in the Channel Islands near Santa Cruz, off the coast of California, on a three day scuba diving trip. The ship was owned and operated by Truth Aquatics, a Santa Barbara-based company. It had been chartered by Worldwide Diving Adventures for the weekend trip. This sfgate.com map identifies where the vessel was at the time of the disaster.

Twenty bodies recovered during 23-hour search, others believed to be in the wreckage of the Conception

By the time a Coast Guard helicopter and fireboat arrived at the ship at 5:00 a.m., two Santa Barbara Sheriff’s Office firefighting boats were on the scene but the vessel was engulfed in flames. The Conception sank at 7:20 a.m. in just over 60 feet of water.

The Coast Guard led a search and rescue operation for twenty-three hours. They called it off at 9:40 a.m. on Tuesday, September 3, 2019.  They believe there were no other survivors. Coast Guard Captain Monica Rochester spoke at an afternoon press conference on Tuesday saying, “This isn’t a day we wanted to wake up to for Labor Day and it’s a very tragic event… I think we should all be prepared to move into the worst outcome…
Our hearts, our thoughts, are with the family, the friends, of the victims.”

Captain Rochester also said the Conception was in full compliance with the Coast Guard.

Twenty bodies have been recovered. The remaining bodies believe to be trapped under the inverted wreckage.

Conception passed most recent Coast Guard inspection, had firefighting systems on board

The Conception was built in 1981. It had a fixed carbon dioxide fire suppression system in the engine room, a portable firefighting system, and smoke detectors. There were no locked doors on the boat. A Bay-area diver told ABC news that he had taken multiple trips on the Conception and said the two exits were easy to access and well-lit at night. He said the staff always conducted orientations at the start of trips. This was confirmed by an experienced Orange County diver who had taken multiple trips on the Conception, according to the LA Times.

It is unknown if the five surviving crew members have any knowledge of how the fire started. The NTSB is leading the investigation, with help from the Coast Guard, the Sheriff’s Office, and other law enforcement agencies. A preliminary NTSB report will be available within ten days, but final reports usually take anywhere between 12 and 24 months.

The five survivors of the Santa Cruz boat fire and the families of the victims deserve answers. Their questions will probably include:

These questions, and many more, will need to be answered before too long. However, survivors and families should not wait on governmental agencies to conclude their investigations before seeking answers to their questions.

Time is not on your side. The NTSB’s report, along with reports from the Coast Guard and other agencies, will not be released until it will be too late for you to take legal action if you need to. In our experience handling maritime wrongful death cases, fire cases, and complex catastrophes, we know that time is working against you. In any complex, catastrophic injury or death case, you need to launch an independent investigation right away. Especially in fire cases and in cases involving a sunken vessel, it is crucial you don’t lose any time recovering and examining the evidence.

Who can file a lawsuit in the aftermath of this tragedy?

The passengers who lost their lives also have legal rights. Their estates will have legal claims, as will immediate family members such as spouses, parents, children, and other dependents. In wrongful death cases, adult siblings typically do not have the ability to file wrongful death cases. There are some exceptions to this rule.

Also, passengers who were on board and on the job for another company, such as Worldwide Diving Adventures, may have additional legal claims.

We recommend you consult an attorney to review your legal rights and answer your questions about filing a lawsuit.

The first step is to consult an attorney and launch an independent investigation. These two things go hand in hand. In order to get access to the evidence, you will need a court order from a judge. At our firm, we know how to get that order from the judge as well as a Temporary Restraining Order (TRO) preventing any evidence from being tampered with, destroyed, or altered with in any way until our investigation is complete. We know the leading experts to hire to conduct your independent investigation and get you the answers you need, fast.

The second step is to file a lawsuit. In maritime wrongful death cases, companies will file limitation of liability claims to protect themselves financially. In doing so, you won’t have two years to file your wrongful death claim, you’ll have to file it by the arbitrary deadline that’s set by the limitation of liability claim. Your compensation claim will also be limited to the value of the vessel.

The value of the Conception is most likely far less than your individual claim and much less than the total amount of everyone’s claims. As of September 6, 2019, the company initiated limitation of liability proceedings. Survivors and the families of the victims of the Conception fire deserve their day in court and they deserve their constitutionally-protected right to be fairly and fully compensated for their losses.

Third, you need to protect your legal rights. Do not speak to anyone except the NTSB, Coast Guard, and other law enforcement agencies. Do not speak to company representatives, insurance adjusters, claims adjusters, company lawyers, or anyone who isn’t a law enforcement officer or an attorney you are considering hiring for your case. Truth Aquatics’ insurance company and their army of adjusters and lawyers will be looking for ways to trick you into sign away your legal rights. They might even send you a check. Do not cash it. It’s another way of tricking you out of your legal rights. Insurance companies have one job: to protect their money. They see your legal and valid claim as a threat to their profits.

Filing a lawsuit means you’re using the power of the justice system to get the answers you need in time to protect your legal rights. It is your right, and it is enshrined in the U.S. Constitution.

By filing a lawsuit, you’re launching an independent investigation and determine who – or what – is responsible for what happened on board the Conception. If a negligent party is determined to have caused this tragedy, your lawsuit will force them to accept responsibility for their safety failures. Our job is to get you the best result possible in the shortest amount of time. And we win more than 96% of the cases we accept, achieving record-breaking verdicts and settlements for our clients.

Our firm is one of the only law firms in the country that has defeated limitation of liability claims in maritime wrongful death cases. We are also national leaders in winning Jones Act injury claims, the type of case that will be filed by the five surviving crew members of the Conception, as well as wrongful death claims. Two of our most recent wrongful death cases resulted in a $44,370,000.00 verdict in favor of our clients and a $17,720,000.00 verdict in favor of our clients. It is important you hire the right law firm with the right experience for your claim from the beginning.