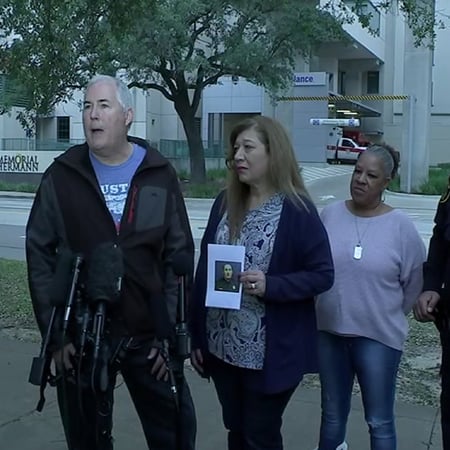 In the early morning hours of December 24, 2018, a drunk driver turned in front of an SUV carrying two Houston police officers. The nearly head-on collision caused the police vehicle to flip over  multiple times then catch on fire.

A helicopter transported Officer Daily to Memorial Hermann for emergency medical treatment. Officer Daily has suffered burns to roughly 50% of his body and remains sedated and in the hospital. He has already undergone at least one surgery and faces more operations in the next few days. Officer Reid, according to Police Chief Art Acevedo, is up and walking, recovering from the burns he suffered in the collision.

Drunk driving crash is just the latest in an epidemic

Houston’s drunk driving epidemic has reached Officers Reid and Daily. Police officers face tremendous risks every day. According to Chief Acevedo, Houston leads the nation in drunk driving crashes. The same night Officers Daily and Reid were hit by a drunk driver, two other police cars were hit by drunk drivers as well. These wrecks are all too common. Data compiled by the Houston Chronicle tells us that 640 people a year die on Houston-area roads, 2,850 more are seriously injured, and that the metro region leads the nation in fatal drunk driving crashes.

Our client, Officer Chayne Brothers, was thrown from his patrol car in May 2018 when a drunk driver smashed into the back of his car while he was conducting a traffic stop. He hired us to hold the responsible parties accountable. This includes Bombshells, a local bar that’s been called a crime factory by the district attorney. Officer Brothers’ million dollar lawsuit alleges that Bombshells and its parent company, RCI Hospitality, are responsible for Officer Brothers’ injuries because “they overserved the driver despite voluntarily submitting themselves to the duties and obligations imposed by the Texas Alcoholic Beverage Code.”

One way to prevent future drunk driving incidents is to hold the responsible parties accountable. If a private venue, business, or bar served the drunk driver, they may be held accountable. That means holding them accountable for either  overserving that person or violating their duties under the Texas Alcoholic Beverage Code. Also, the police officers can file an injury claim with the drunk driver’s insurance company.

Police officers are able to file lawsuits outside the worker’s compensation system in cases like these. As in the case of Officer Brothers and Officer Daily, these injuries can take an as-yet-unkown amount of time to heal. That means the officers are out of work, unable to pay their bills, and unable to provide for their families. In addition, their injuries may affect their ability to pursue their career goals to the fullest extent. This may impact the amount of money they can earn in the future. Drunk driving crashes have far-reaching, often permanent impacts.

Our goal in Officer Brothers’ case and in every case, is to make the community a safer place. That may mean:

In Officer Daily and Reid’s case, investigators believe a grocery store may be responsible for selling beer to the drunk driver multiple times that day. If it is determined the grocery store was negligent, the officers could file a lawsuit agains the grocery store

For help holding a drunk driver accountable or for help holding the establishment that sold or served them the alcohol accountable, consult our attorneys now. Call 877-724-7800 or fill out a contact form to find out your legal rights. We will answer all your questions and help you determine what your next steps should be.