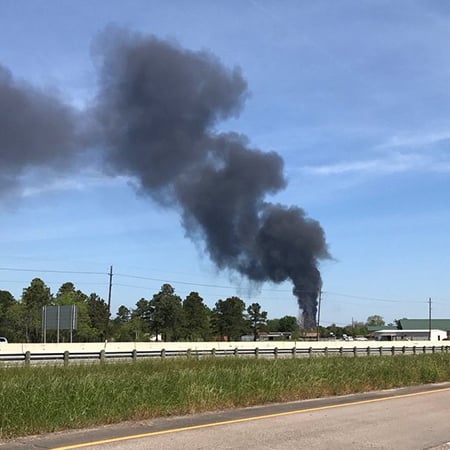 Emergency crews responded to a chemical plant fire off the Crosby Freeway on April 2, 2019. The fire broke out at KMCO, which is located at 16503 Ramsey Road. Earlier reports from Sheriff Ed Gonzalez stated that two people were injured. As of 1:00 p.m., authorities report that one person is dead and two people have been transported to area hospitals by Life Flight.

The sheriff also reported that the EPA has been on the ground and in the air. The EPA reports they are not detecting anything in the air that would prompt officials to take action. Harris County experts are also monitoring air quality.

Residents told ABC13 that their homes were shaking and they were seeing a thick column of smoke in the air.

Initial reports from Sheriff Gonzalez state that the fire was started by Isobutylene. One worker told ABC13 a leak had been detected just before the blast. He told ABC13 that workers were “scrambling out of the area, even crawling under fencing to get away.”

The sheriff and the spokesperson for the Harris County Fire Marshal’s Office, Rachel Moreno, said the fire seems to have started when a transfer line ignited close to a tank containing isobutylene. In addition to the tank catching fire, an adjacent storage building containing solid goods also caught fire.

According to Houston Public Media, the Harris County Fire Marshal’s Office was notified of the incident at approximately 11:00 a.m.. They have sent hazmat crews and inspectors and are investigating what chemicals are in the facility at this time.

Firefighters battled the blaze for more than five hours. The fire was extinguished around 4:00 p.m. on April 2, 2019.

KMCO employs more than 180 full-time employees at its Crosby facility. They work on 28 reactors, more than 600 storage tanks, and 250 rail storage spots, according to their website.

We will continue to update this article as the story develops.