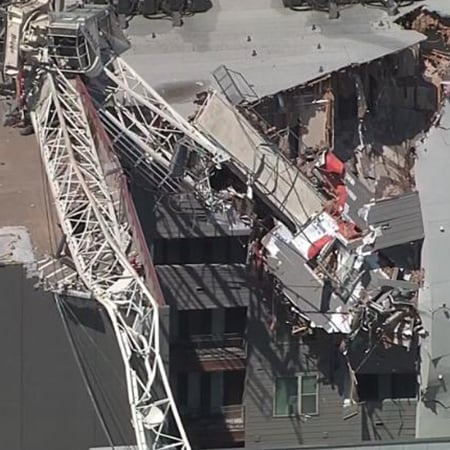 A crane collapsed onto the Elan City Lights apartment complex in Dallas, Texas, killing at least one person and injuring multiple people on June 9, 2019. Dallas Fire-Rescue report that the investigation is “extremely fluid.”

Their spokesman, Jason Evans, went on to tell reporters that crane caused multiple collapses in both residences and the parking garage. He also reported that two victims were listed in critical condition. Three other people were listed in “serious” condition. More victims may be found as the investigation continues.

Some areas are still too dangerous for officials to access. Mr. Evans also reported that their number one priority is accessing a living area where all five stories inside the structure have collapsed. CNN reports that live-rescue dogs are being used to search for people trapped in the debris.

Collapsed crane owned by a company with offices in Houston, Texas

Elan City Lights is at the corner of Good Latimer and Live Oak in Downtown Dallas. The crane appears to be owned and operated by Bigge Crane, a company that has offices in Houston, Texas. It was on a construction site near the Elan apartments.

Construction sites tend to have multiple layers of safety rules and insurance policies to protect people. But sometimes, companies and their employees choose to prioritize profits over safety and ignore the rules. That’s why we recommend you consult an attorney as soon as possible. You have to protect your legal rights, which the right attorney can do immediately.

At our firm, we’ve handled multiple crane collapse cases and have obtained historic $17.72 million and $44.37 million verdicts on behalf of clients whose loved ones were killed in similar circumstances. We know how quickly companies get to work “cleaning up” these locations. And how easily evidence can be damaged or destroyed. We get to work right away, filing a Temporary Restraining Order to prevent any evidence from being moved, tampered with, or thrown away before our independent experts can conduct a thorough investigation.

Was this a freak accident? Or could it have been prevented?

CNN also reports that a severe thunderstorm watch was issued at 11:25 a.m. this morning. It included the Dallas-Fort Worth area according to CNN meteorologist Gene Norman. The National Weather Service reports that the watch is in effect until 10 p.m. CDT. He reports, “This was in response to a Mesoscale Convective Complex, a group of organized thunderstorms which originated in Oklahoma earlier in the morning. The same system produced localized flash flooding and strong storms with high winds in Oklahoma City during the morning.” Kyle Roberts, a meteorologist for WFAA in Dallas tweeted this timelapse of the weather:

Construction companies and crane companies are required to have safety policies in the event of severe weather. An independent investigation will reveal if there were such policies in place. It will also reveal if the policies were followed and if they did have time to take steps to prevent the crane from collapsing. It is important to find out if the company knew about the severe weather warning and how they responded.

Modern cranes are designed to withstand 140 mile per hour winds. They also have onboard computers, which record whether or not the brakes were set. It will also tell us if the crane was allowed to swing freely in the wind, which is the current safety protocol for high-wind situations.

To find out how we can help you if you’ve been injured in this crane collapse, or if your loved one was killed, contact us at 877-724-7800 or fill out a contact form.

Our firm’s mission is to fight for people who have been injured by a company’s negligence. We have a track record of success in crane collapse cases. We know how to get you the answers and compensation you are owed.