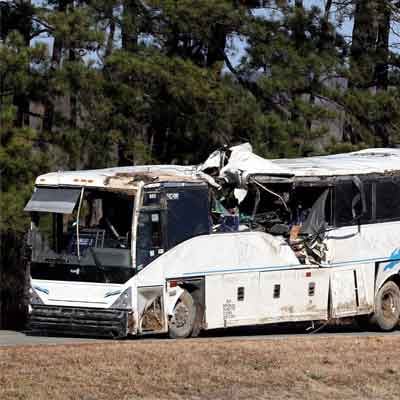 Early on Monday, a bus accident took the life of a third grader and injured at least 45 others when the bus they were traveling in flipped over several times and crashed. The teams were returning home from an all-star tournament in Dallas, Texas when the charter bus owned by Scott Shuttle Service of Tennessee left the roadway and overturned on Interstate 30, west of Benton, Arkansas.

The school district identified the boy who lost his life as Kameron Johnson who was a third-grader at Aspire Coleman Elementary School in Memphis, Tennessee. The school issued the following message on Twitter “There is nothing more devastating than the loss of a child, and our hearts are broken for the families impacted by the bus accident this morning.”

The driver of the bus says she lost control, causing the bus to roll off the interstate and roll down the embankment. Injuries ranged from skull and arm fractures to liver and spleen lacerations. A few passengers underwent emergency operations.

The bus company has a history of safety violations

According to the Federal Motor Carrier Safety Administration,  Scott Shuttle Service’s federal safety records show they received several safety violations and fines in recent years. In fact, only one of the company’s seven drivers were inspected in the last two years.

It is still unclear why the driver lost control of the bus. Investigators say the weather was clear and road conditions were dry at the time of the crash.

Bus accidents occur all too often in Texas

Many injuries and deaths occur in Texas due to bus accidents.  According to the National Highway Traffic Safety Administration (NHTSA)  around 300 fatal bus accidents occur yearly. Even in crashes with no fatalities, bus accidents usually result in serious injuries and large amounts of property damage.

In 2017, a young woman catastrophically injured when a Greyhound bus rear-ended an 18-wheeler, hired VB Attorneys to handle her case. Attorney Vuk Vujasinovic personally traveled to Pennsylvania to help investigate the crash. Read more about this case.

If you or a loved one have been injured in a bus accident, you should know that time is ticking. The bus company and their representatives will immediately take action to keep from being held responsible. You need an experienced, bus accident attorney on your side. Feel free to reach out to us by phone at (877) 724-7800 or by filling out a free, confidential case evaluation.