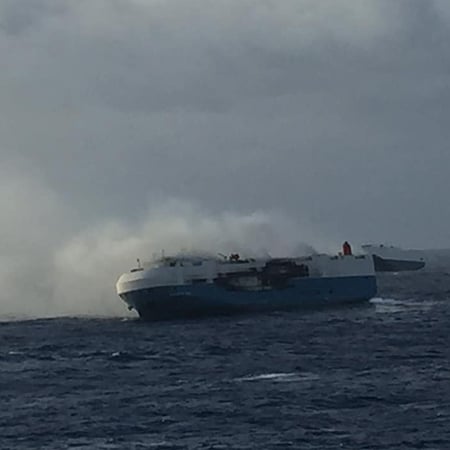 At about 1:04 a.m. Hawaii time on December 31, 2018, the captain of the Sincerity Ace reported they were dealing with a serious fire and said they were abandoning ship. The ship’s initial communication with the Coast Guard included a report that the crew was able to launch one of the life rafts and four of the 21 mariners abandoned ship with lifejackets. The Coast Guard could not confirm if they reached the life raft upon entering the water.

Watchstanders in Honolulu issued a SafetyNet broadcast requesting the assistance of vessels in the area and directed the launch of Hercules aircrews from Air Station Barbers Point. These Coast Guard aircrews and five merchant vessels came to their aid. Merchant vessels were able to rescue 16 of the 21 crewmembers. Lt. Duane Zitta from the Coast Guard Joint Rescue Coordination Center Honolulu thanked the merchant marine crews, saying:

“We are thankful for the assistance the crews of these merchant vessels have given us during this event, significantly reducing possible response time. Their quick actions provided for the rescue of 16 members of the crew who would otherwise still be in the water and are continuing to aid us.”

Two crewmembers remain missing, three are presumed dead. These three crewmembers were located in the water but could not be recovered because they were non-responsive. Search efforts focus on the two remaining potential survivors. The search area covers 5,832 square nautical miles.

The commercial vessels are part of AMVER, or Automated Mutual-Assistance Vessel Rescue System. It is a global voluntary reporting system sponsored by the Coast Guard. AMVER is a worldwide system that search and rescue authorities use to help people at sea who are in distress.

The owners of the ship have been coordinating with the merchant vessels to transport the mariners safely home. In addition to getting the crew home, the Sincerity Ace’s owners are also formalizing their plan to salvage the ship. Commercial tugs are on their way to retrieve the ship.

The cause of the fire remains unknown.

The crew of the Sincerity Ace deserve answers and help. Some of the questions they and their loved ones are sure to ask include: