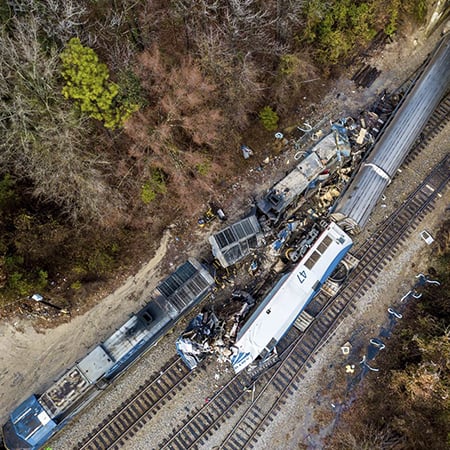 In the early morning hours of February 4, 2018, an Amtrak train traveling from New York to Miami crashed into a parked CSX freight train. The impact killed two people and injured 116 of the people on board the train.

At the time of the wreck, CSX’s dispatchers were in charge of the switches for that section of the train track. CSX had switched the track in order to redirect their freight train to a siding to unload it. By manually operating the switches, they failed to change the track back and they failed to inform Amtrak of the switch position. Investigations into this train wreck will uncover what happened when, and who is ultimately responsible.

An independent investigation will tell you who was responsible, why the wreck happened, and how it could have been prevented. These are all key factors in holding the responsible parties accountable. In Amtrak’s case, this fatal wreck comes less than a week after a train collided with a garbage truck in Virginia and less than two months after a train derailment in Washington. Both of these other fatal accidents are part of a pattern of behavior in which Amtrak puts profits over the safety of the millions of people who trust the company with their lives.

Will CSX be sued by victims and families of the South Carolina train wreck?

CSX will most likely be sued by victims and families of the South Carolina train wreck. While the investigation may prove them innocent of any wrongdoing, they need to answer questions and provide information to the victims and their families of this train wreck. CSX will have the information you need to determine why the wreck happened since initial reports claim their dispatchers were manually operating the switches on that stretch of track in South Carolina.

Victims and families deserve to know the whole truth about why this tragedy occurred. By suing CSX in addition to Amtrak and any other party that may be responsible in some way for this tragedy, you will learn all the facts. If it is determined, through the investigation and depositions, that CSX isn’t responsible, the judge may either dismiss CSX from the lawsuit or have the jury decide if CSX should be held accountable in any way.

As with Amtrak, CSX doesn’t have a spotless safety record. CSX was found to be responsible for the death of a woman who killed working on a movie set that was filming near a train track in Georgia in 2014. CSX was ordered by a jury to pay $3.9 million to the woman’s family. In that lawsuit, attorneys for CSX argued, unsuccessfully, that evidence of failure to follow company policies doesn’t prove the railroad was negligent.

27 people have been killed, more than 631 people injured in Amtrak wrecks since 2008.

This South Carolina train wreck is Amtrak’s 21st collision or derailment since 2008. Experts believe Positive Train Control (PTC) would have prevented many of these collisions. Amtrak, CSX, and other train companies have until the end of 2018 to install PTC nationwide. PTC is a system that controls traffic movement. Equipment on board each train would enforce train speeds, avoid collisions, enforce temporary speed restrictions, and keep rail workers safe while working on tracks. If PTC had been in place for these two trains, it stands to reason the train track switch would have been returned to its original position, meaning the Amtrak train would not have been diverted to the siding. Even if they were on the same track, the Amtrak train would have been notified that the CSX train had stopped if PTC had been in place on these trains.

In October 2008, Congress passed the Rail Safety Improvement Act after an Amtrak train struck an 18-wheeler in Northeast Harris County, Texas and a Metrolink train collided with a Union Pacific freight train in California, killing 25 people and injuring more than 135 passengers.

This law required rail operators to install PTC on their trains by 2015. That deadline has since been extended to the end of 2018.

While Congress delayed the installation of PTC until 2018, Amtrak is accountable for the deaths of 27 people and for the injuries of more than 631 people since 2008.

An independent investigation into the South Carolina train wreck will determine if PTC would have prevented this tragedy. The investigation will also determine to what extent Amtrak and CSX should be held accountable for failing to implement this technology on these trains in the 10 years since the Rail Safety Improvement Act was passed in October 2008. Independent investigations can be the first step to helping victims and loved ones force companies to do the right thing and enact the policies that will prevent future injuries and deaths.

Often, in order for you to launch an independent investigation, you have to go through the civil justice system. Companies and federal agencies typically block any attempts to gain access to evidence or people crucial to your investigation unless a judge forces them to give you and your investigators access.

This is where an experienced personal injury and wrongful death attorney comes in. In addition to helping you understand your legal rights, an attorney experienced in handling complex injury and death lawsuits will know how to launch an independent investigation by doing the following:

Consulting with an attorney as soon as possible after a train wreck is crucial to protecting your legal rights as well as protecting the value of your claim. Even if you don’t think you need a lawyer for your case, you need to at least make sure Amtrak is not trying to trick you into signing a lowball settlement agreement.

Amtrak, CSX, and other large companies train their adjusters and attorneys to make you think that they have your back and are working for you. In reality, they are tricking you into letting your guard down so that you talk to them. Everything you tell them gives them ammunition to shoot down your case. Adjusters have even convinced unsuspecting injury victims to sign away their right to ever file a lawsuit. And we’ve seen too many people who’ve been victims of infamous delaying tactics. By the time the adjuster comes back with a settlement offer, it’s too late for you to file a lawsuit if you don’t like their offer.

Amtrak and CSX, like every other company, must answer to their shareholders. The more money they pay out in settlements, the less money their shareholders get. The longer they delay paying you, the more likely they are to get away with paying you pennies on the dollar. They are counting on you to trust them.

Our role as attorneys is to ensure that you can focus on recovering while we get you the best result possible. It is our job to do everything possible to make the companies give you just compensation for your losses, take responsibility for failing to keep you safe, and change the unsafe practices that caused this wreck.