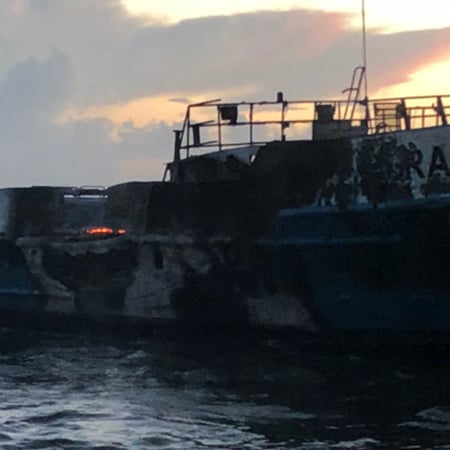 The Grand Sun caught fire in the Chandeleur Sound off the coast of Louisiana around 2:30 a.m. on October 8, 2018. Four people were rescued from the offshore crewboat by the Coast Guard. The aircrew from the Coast Guard transported the four people aboard the boat to emergency medical services at Air Station New Orleans.

A response vessel has been launched to monitor the vessel’s location and check for possible pollution. No further details were immediately available.

Next steps for crewmembers injured aboard the Grand Sun

The four crewmembers aboard the Grand Sun may be able to file Jones Act injury claims, the maritime equivalent of worker’s compensation claims, for their injuries. Maritime companies have a legal duty to their employees to provide them with seaworthy and safe work environments. Having your offshore crewboat catch on fire appears to indicate the company may not have followed the law.

The crewmembers should file incident reports as soon as possible and then pursue their Jones Act claims if they were injured in this fire. If they were employed by a different company than the one that owns and operates the Grand Sun, they may be able to pursue a third party claim.

If you were injured in this incident or in a similar incident on the water, consult our experienced maritime work injury attorneys today. We will answer your questions, help you learn more about your legal rights, and help you make an informed decision about your next steps. Call us at 877-724-7800 or fill out a contact form.