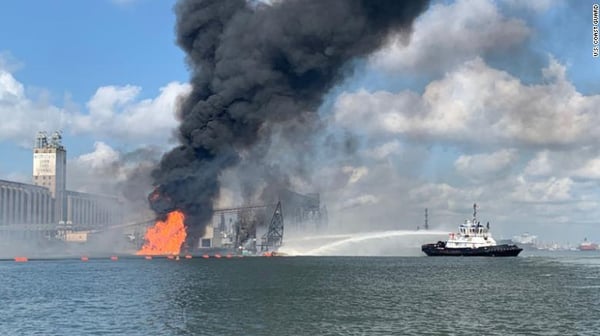 The Waymon I Boyd, a dredging barge hit a natural gas pipeline at the Port of Corpus Christi, Texas, early August 21st, causing an explosion.

Reports have been made that six crew members were injured. Four were taken to hospitals by ambulance, and two others were airlifted to a nearby hospital by the Coast Guard.

Shortly after the explosion, Enterprise said they had “experienced a release of propane from a portion of its South Texas pipeline system at the Port of Corpus Christi. The incident resulted in a fire and unconfirmed reports of injuries," - "Initial findings indicate that the pipeline was struck by a third-party dredging barge working in the immediate vicinity; however, a full investigation will be conducted to determine the cause."

The National Transportation Safety Board will be investigating the incident.

This account of the explosion will be updated as the story unfolds.

Injured in the Pipeline Explosion? VB Attorneys Can Help You

If you or someone you know was among those injured by the propane pipeline explosion caused by the dredging barge collision, you might be entitled to significant compensation. Our law firm has a longstanding track record of defeating maritime companies in Jones Act Lawsuits.

If you or someone you know was injured during the propane pipeline explosion, you must contact an experienced attorney right away. Click here to receive a free and completely confidential case evaluation or call us at 713-224-7800 today.