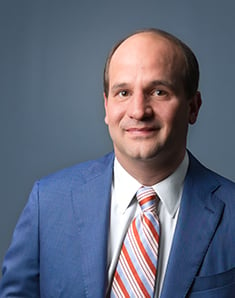 Curtis Bickers is Board Certified in Personal Injury Trial Law by the Texas Board of Legal Specialization and has gained national recognition not only for his work on catastrophic cases, but also for his dedication to his profession. Curtis has been working at the firm since 2008 and became a Partner in the firm in 2011. He was approved for recertification by the Texas Board of Legal Specialization in January 2016. As a personal injury trial attorney, Curtis has tried numerous cases to verdict and recovered millions of dollars for his clients and their families.

Before joining the firm as the first attorney the firm hired, Curtis started clerking and later practicing law at a large defense firm in Houston that represented corporations accused of injuring people with their products. Curtis saw firsthand how the large insurance and Fortune 500 companies defend personal injury lawsuits and tactics used to prevent injured people from recovering for damages. Curtis soon realized that his passion in practicing law is helping injured people and using his skills in the courtroom. Curtis says, “It is my job as an attorney to be the voice in the courtroom for people who have been severely injured. A voice of compassion, integrity, and understanding.”

Curtis was born in Abilene, Texas, on Dyess Air Force Base. After his father retired from the United States Air Force, the family moved to Houston, Texas, in 1978. Curtis was active in sports during high school and obtained the distinguished honor of Eagle Scout in 1993. After graduating from high school, Curtis attended Texas A&M University and graduated with a bachelors degree in 1999. While attending college, Curtis was a member of the Corps of Cadets and held numerous leadership positions within the Corps, including with Parsons Mounted Cavalry.

Curtis earned his law degree from South Texas College of Law located in Houston, Texas. Curtis was very active in the mock trial program and was invited to participate in the law school’s summer trial advocacy program in 2002. Only a select few law students participated in the summer program and were mentored throughout the competition by experienced trial attorneys. Although Curtis knew since his junior year in college that he wanted to be an attorney, the trial advocacy program at South Texas College of Law under the guidance of Dean T. Gerald Treece made Curtis realize his true calling in law was to be a trial attorney.

Curtis has been married since 2006 to Monica Bickers. He is the proud father of two little girls. When not practicing law, Curtis enjoys spending time with his family, playing golf, and traveling.

Curtis with his wife and daughter

Curtis with Joyce Galama, a client injured in an accident.

Curtis with Oscar Soto, a client injured in a work accident.

Victory photo of me and former VB Attorney Sean Cichowski with Darling Lopez after we won his trial in Harris County.

Celebrating with Lena and Byron after her first solo trial victory

The day I got sworn in by Judge John T. Wooldridge, who was presiding over the 269th of Harris County, Texas.